Urbanity – in its essence it is the paradigm behind modern town planning. Whether it is a private or public space, in the minds of city dwellers it is synonymous with authenticity, diversity and lifestyle. These aspects interact with each other to achieve one of the key goals of town planning: a feeling of being welcome. Simply opening a door to find a piece of home. This aspiration is a source of identity, both internally and externally, for the newly constructed building in the station square of the Hanseatic city of Bremen.

The exterior of the building complex named “City Gate” shows visitors the way from the train station to the city centre. A Wanzl Galaxy Gate greets guests to the ibis budget Bremen City Center hotel, located inside City Gate. On the sixth floor, it controls access to one of the highest breakfast rooms in the city.

The cube, the brainchild of renowned architectural firm Max Dudler, with its expansive concrete and glass façade, is the first thing that visitors see of Bremen when they leave the train station. It is literally the gate to the city, an impressive structure true to the Hanseatic architectural tradition. It consists of two complementary halves – an office building and a hotel building. The hotel complex is designed as a sharp angle, with the recesses in the façade making the dynamic effect of the building even more impressive. As an expressionistic gesture, they are intended to point to the architectural history of Bremen and thereby link the historical architecture with urban modernism. The ibis budget Bremen City Center hotel has been in the seven-storey building since spring 2019. The Accor Group’s concept, in collaboration with its franchise partner of many years, the Success Hotel Group, relies on contemporary design in a trendy, relaxed atmosphere. Or, briefly put: urbanity. Functionality with a modern flair at a fair price is how the hotel chain defines its corporate culture.

The ibis budget Bremen City Center offers 194 comfortable rooms with modern bathrooms on four floors. A pre-booked continental breakfast that guests can either take away or enjoy in the breakfast room after having made a prior reservation ensures an energetic start to the day. Access to the breakfast room is easy and seamless via the Galaxy Gate from Wanzl. 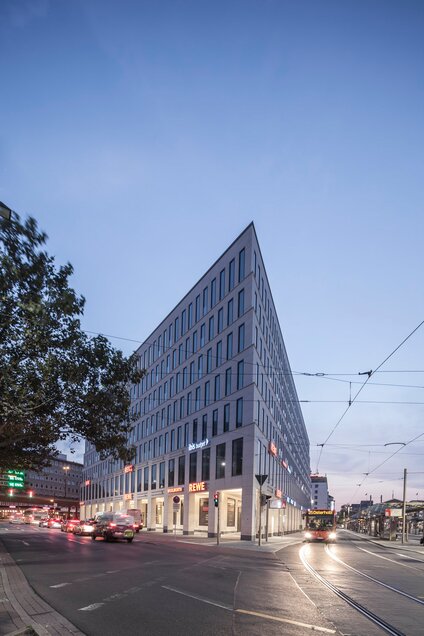 Deciding factors for installing an automatic access control system in the breakfast area were to optimise personal service and sustainable food and beverage management: “Our breakfast service is optional. This means that our guests can book it when they reserve their overnight stay or they can book it on the spot when checking in at the reception. They then receive their access authorisation via a ticket with a barcode. Thanks to automatic authentication, our staff can focus fully on serving our guests.

In addition, the Galaxy Gate allows us to keep track of the number of guests making use of our breakfast offering,” explains Caroline Nguyen, Head of Communication of the Success Hotel Group. “With the new regulations on health in the workplace, organised access has become all the more important in order to maintain social distancing between breakfast guests.“Authentication is easy and quick via a barcode scanner at the Gate – once access is granted, the safety glass swivel arms open up the way to the set breakfast table. 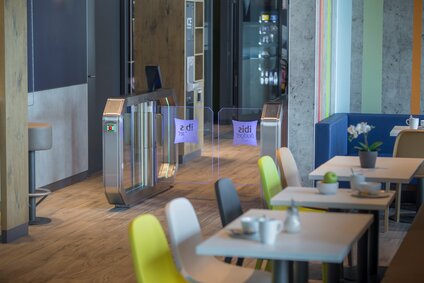 Besides functional aspects, the hotel’s concept also requires the access system to be well-designed. The interior design of the breakfast room in the ibis budget Bremen City Center is a mix of cosmopolitan chic with furnishings in the 1960s style and is thus skilfully in line with the urban character of the building envelope.

The generous use of floor-level window glazing allows natural light to stream in and provides a clear view of the city. Similar to the exterior elevation, the interior is designed using a light-coloured, untreated concrete. The architectural instrument of spatial linkage, which can be seen in the two-part cube of the City Gate building, is found in an adapted form inside the hotel complex, where the breakfast room and hotel foyer merge seamlessly into one another. Parquet flooring in an oak look generates the feeling of a living room, large, wooden longitudinal panels add contour to the room. They thus provide the possibility of privacy without being restrictive. 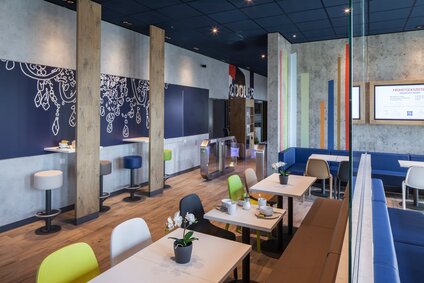 The colourful seating arranged in-between the wood and exposed concrete elements stands out particularly well, while the pure white tables in a bistro look are visually discreet. The Galaxy Gate made of stainless steel and glass blends discreetly and elegantly into this architectural overall concept. It separates the foyer from the breakfast area, while retaining the open-plan feeling. The safety glass fronts of the swing gates allow a clear view of the generously designed ambience. The transparent, purist materials of the Gate are visually less prominent than the colourful and multi-faceted design of the interior.

LED elements at the Gate, which illuminate in blue, green or red depending on the operating status, complement the colourful accents on the wall and furniture. The glazed swing arms are customised and bear the logo of the hotel chain, which harmonises discreetly with the colour scheme on the ceiling and walls with its blue ambient lighting. The overall colour concept creates a pleasant atmosphere, while colourful block stripes and drawings of white chandeliers on a blue background further enhance the inviting feeling of the space. After all, the visual experience is part of a meal – once seated here for breakfast, it will be tempting to stay a while. "Hospitality is always our top priority," explains Nguyen. "With its minimalist design, the Galaxy Gate perfectly reflects our aspiration of creating a natural hotel experience.“

Separation through refinement: this is the philosophy behind both the interior design and the building as a whole. Whether foyer and breakfast area or office and hotel complex, spaces are always juxtaposed and yet are linked to each other by the symbolic opening of a door, as in the City Gate or with the Galaxy Gate. The result? Defined spaces with a welcoming atmosphere.